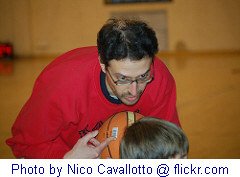 Chest Pass
-Hold the basketball close to chest.
-Fingers spread around the ball.
-Step forward and extend arms sharply pushing the ball to target.
-As arms straighten while releasing the ball, wrists should snap inward.
-Thumbs should be pointing downwards, while other fingers should always follow the direction of the target.
-Communication- make eye contact before passing.
Overhead Pass
-Players holds the ball above their head using fingers to cup it.
-If there is enough room, player takes a step towards target.
-When making the pass, release the ball from slightly behind head.
-Exaggerate the flicking movement in fingers and wrists to provide more power in the pass.
Bounce Pass
-Similar to chest pass.
-Player take step towards target and make a chest pass to the floor about 2/3 of the way between the player passing and the target player.
Baseball Pass - Used when a long crosscourt pass is needed and and overhead or chest pass wont work.
-Player uses the same technique as throwing a regular baseball.
-Player should start in a balanced stance with feet shoulder width apart and use the back foot to pivot on to turn the body to the side to which they are going to pass from.
-The ball should be held slightly behind ear, and the weight should be kept on the back foot.
-Step in the direction of the pass using legs, back, and arms to create the majority of the power needed.
-Use wrist and fingers to release the ball off the first and second fingers of the throwing hand.
Dribble Pass (or off dribble pass
This is a chest pass that is released while the player is dribbling the basketball.
« Back Home