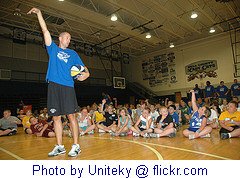 Balance
Feet should be shoulder-width apart, shooting leg slightly in front of the other (if player is right handed this is the right leg ). Knees should be bent as the power from the shot starts with the straightening of the legs.
Eyes On The Target
The shooter should focus his/her eyes on the target for the duration of the shot. Focus on the rim or if you are shooting a bank shot, your target should be near the tip of the box on the backboard. Players should not watch the flight of the ball is a bad habit for shooters.
Elbow
The shooting forearm and elbow is in line to the basket. As the elbow extends to shoot the bail, it remains in a straight line pointing to the basket. The left hand steadies or guides the ball on the side. The guide hand is not involved with pushing the ball.
Follow Through
The wrist should be bent back holding the ball. Power comes from straightening the legs, up through the body, to the straightening elbow, the wrist flexes, with the ball rolling off the fingertips. A nice follow through will have the arm fully extended, wrist flexed, with fingers pointing to the floor.

Proper "Arc" in important also. Players should be shooting up rather than at the rim. The shooter should try to drop the ball into the rim.

To teach the right mechanics or technique, have beginners start by shooting at a target on the wall, or by standing about 10 feet from a partner and attempting to drop the ball on their partners head.

Once the players have the right technique, graduate to shooting at the basket. Have them start from close in. Gradually increase the distance of the shot as players gain more confidence.

When the basic mechanics of the shot have been mastered, players should practice shooting at speed and with pressure to simulate game conditions.